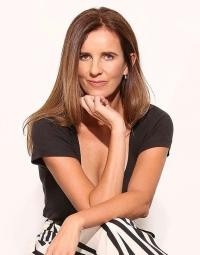 Lisa Messenger is the vibrant, game-changing CEO of The Messenger Group, as well as founder and editor-in-chief of Collective Hub – a multimedia business and lifestyle platform, comprising of a print magazine distributed into over 37 countries, an online news site and event agency. All of which serve to disrupt, challenge and inspire audiences around the world. In addition, she has worked globally in sponsorship, marketing, PR and publishing.

Lisa launched The Messenger Group in 2001, which has since custom published more than 400 books for companies and individuals. Lisa has authored and co-authored 16 books and become an authority in the start-up scene. Most notably, Lisa charted her rollercoaster ride to success in best-selling book Daring & Disruptive and its sequel Life & Love, which reached #1 on Booktopia. Lisa’s following book, Money and Mindfulness was released late in 2015 and also hit best-selling status within the first month. In 2016 Lisa released Break-ups and Breakthroughs, thus adding to her collection of writing achievements.

Lisa has been a regular commentator on business, entrepreneurialism and property and has sat on a number of boards including the Australian Businesswomen’s Network and Publishers Australia. She’s a three time finalist in the Telstra Businesswoman of the Year and won Alumni of the Year for Southern Cross University. Lisa is also a regular contributor to the Huffington Post and has her own section on Telstra’s Smarter Business Ideas online.

Her passion is to challenge individuals and corporations to change the way they think, take them out of their comfort zone and prove that there is more than one way to do anything. She encourages entrepreneurial spirit, creativity and innovation and lives life to the absolute max. Lisa’s vision is to build a community of like-minded people who want to change the world.

With fans including Sir Richard Branson, New York Times Best-selling author Bradley Trevor Grieve, and a social media following of over 100,000, Lisa’s vision is to build a community of like-minded people who want to change the world.