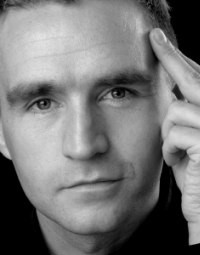 In today’s unforgiving and unrelenting business landscape, the ability to adapt quickly and evolve radically is the new currency for success; promoting agile, forward thinking organisations who embrace failure as necessary learning experiences, take risks as part of their decision making philosophy and value creativity, innovation, communication, leadership and bravery as some of their most important business drivers.

Nothing is guaranteed in business anymore - yet trying to ignore uncertainty can have the most profound of consequences.

Perhaps it’s time to face up to the unknown. And embrace it.

With a diverse career that has encompassed acting, broadcasting, screen writing, entrepreneurialism and a three year spell as a professional poker player in Las Vegas, Caspar Berry has forged a reputation for being one of the world’s most influential keynote and motivational speakers specialising in the subjects of uncertainty, risk, decision making, and change.

Having enjoyed early success in an acting career that included roles in renowned British BBC television dramas and Emmy Award winning films, Caspar went on to study Economics and Anthropology at Cambridge before emerging as a screen writer for Film Four, Miramax and Columbia Tri Star.

Yet it was a compelling decision to swap the allure of Hollywood for the chance to battle with the some of the world’s best poker players in the Nevada desert that introduced Caspar to the world of risk and uncertainty; attributes he brought back to the UK to apply to the world of business when he founded Newcastle-based production company Twenty First Century Media.

After building it into the fastest growing audio visual company in the North East of England, Caspar sold the business to Sir Bob Geldof’s AiM-listed multimedia behemoth Ten Alps in 2008. In the process his progressive and intuitive approach to fostering creative corporate cultures, and embracing uncertainty in business, caught the attention of some of the most respected names in business.

Having worked closely since with prestigious global corporations such as Nestlé, American Express,  Google, Pepsico and IBM, Caspar has delivered over 1000 speeches on risk and transformation and worked with executive leadership teams across almost every sector and industry; combining challenging cutting edge scientific research and real world experience to deliver powerful change programmes affecting their levels of productivity, efficiency and innovation.

Caspar's presentation stimulated a great deal of very productive discussion about all our attitudes to risk taking and really helped crystallise some of the critical decisions we need to make across the business. It helped us understand each other as individuals and will be talked about and referenced for a long time to come. We would highly recommend it to any executive team in business.

Caspar's session was engaging and intelligent. He uses his experience from playing poker in Vegas with a Cambridge education in Economics to present a unique and captivating presentation. I came away feeling energised and entertained and the main learning points were that sometimes, calculated risks are very much worth taking. Without them, it's difficult to get the big wins! It really gets you to think about your own mindset in a very different way. The feedback has been very positive!

Caspar's approach to helping my team to understand risk was an inspiring and enjoyable one. The personal reflection on risk taking helped the senior team to understand its own barriers to business growth, how they might overcome them in taking the Association forward. In tackling the development of our new three year business plan, Caspar's name and thoughts have come up many times in discussion! Highly recommended in the current financial climate.