Resilience Lessons for Corporate teams Posted on May 24, 2017 in Team Building 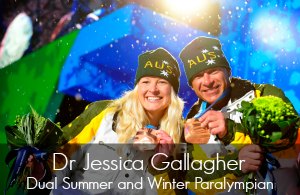 Dr Jessica Gallagher was born on 14 March 1986 in Geelong.

She was diagnosed with a rare disease, cone dystrophy, in her mid-teens, causing her to lose much of her eyesight. She is now classified as legally blind.

Jess has been involved in elite sport for much of her life, having represented Victoria in netball and being named as an emergency for the Australian U16 netball team. She also represented her region in underage basketball.

Since losing her eyesight, Jess has turned her sporting attention to representing Australia at the highest level in both winter and summer sports.

She was first selected to represent Australia at the 2008 Beijing Summer Paralympics but narrowly missed qualifying due to the sight in one eye being 0.01% too good to be eligible. When she returned to Australia, she took up alpine skiing and by 2010 was ready to compete in her first Winter Paralympics in Vancouver, Canada.

Assisted by her skiing guide, Eric Bickerton, Jess became the first Australian female to win a medal at a Winter Paralympic Games, finishing third in the Women's Slalom for Visually Impaired.

She returned to athletics soon after the Vancouver Games and in 2011, Jess became the first Australian female to medal at both a Winter and Summer event at international level when she won the silver medal in the long jump and the bronze medal in the javelin at the 2011 IPC Athletics World Championships in Christchurch.

In 2012, Jess qualified to participate at the London Summer Paralympics, but tore her meniscus six weeks out from competition. Despite being severely hampered by her injury in both training and competition, Jess participated in both long jump and javelin, finishing fifth and sixth in her events.

Outside of her sporting activities, Jess is also a fully qualified and registered osteopath and a professional speaker.

What is unique but probably not surprising is the relevance Jessica’s message has for the business world of today as we all face greater volatility, uncertainty, complexity and ambiguity. The VUCA world might be new to us but to Jess its standard operating procedure. It’s somewhat ironic then that the expert who might lead us into this future is one with low physical vision but an acute foresight around what it will take to thrive in this rapidly disrupted workspace.

"Thanks to our I Support Women in Sport (ISWIS) campaign, I crossed paths with this inspiring, driven, vivacious and smart woman about five years ago. While I'm impressed with her sporting and eductional achievements, I've been even more impressed by her off-field performance. She is the utmost professional. She was the keynote speaker at our 2014 ISWIS Awards' night and she was absolutely fantastic - well-prepared, interesting and had the room riveted the entire time she was on stage. I look forward to working with this fantastic woman in the future (and not just because she goes for the same footy team. Go Geelong!)."
Editor, Womens' Health Magazine Australia

Dr Jessica Gallagher is available for keynote presentations, half day or full day workshops and one week programmes. She travels ex Melbourne.

For more information about Jess, her speaking fees and/or to check availability to speak at your upcoming event, please contact the team at Great Expectation on 1300 55 64 69 or at team@greatexpectation.com.au