A Humbling Announcement by lifeline Posted on May 31, 2018 in Mental Health

In 2000, police officer Daryl Elliott Green was TWICE SHOT in the face and shoulder while investigating a neighbourhood dispute. Despite receiving a 'Valour Award' and a 'Group Bravery Citation', Daryl suffered PTSD for years after the incident.

Daryl also underwent more than a dozen surgeries, successfully waged a 10 year battle for criminal compensation, overcame one of his greatest fears (which he speaks about in the film below), was featured in an episode of Australian Story, earned a Master’s degree in Finance and achieved three further promotions within the Queensland Police Service.

He has a natural gift for professional speaking and it sees him captivating and inspiring audiences, often bringing them from tears to laughter as he recounts his journey from suicidal depression to recovery. 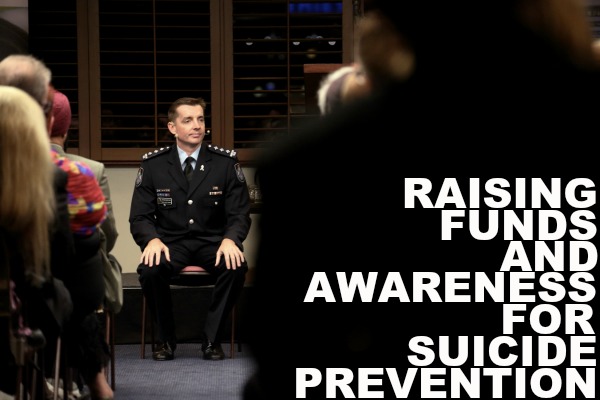 Several key events have occurred in Daryl’s life over the last few years, all of which have contributed to his most humbling experience to date, being announced as a Lifeline ambassador.  These events are depicted below.

In 2015, Daryl was recognised as the top emerging speaker when he was awarded the Kerrie Nairn Scholarship from Professional Speakers Australia (PSA).

A chance encounter through PSA with film director Michael Hanson led to the making of a powerful 6 minute documentary on Daryl’s story. Michael was amazed to meet a man who had been shot in the face and survived and yet appeared so relatively unscathed.

Ashley Gordon of Carillon Conference Management heard Daryl speak, saw the film and said ‘I know someone you should meet’.

In 2016, Ashley invited Daryl to a fundraising event in Sydney and introduced him to the Chairman of Lifeline, John Brogden AM.

The synergies between Daryl’s story and Lifeline’s vision for a suicide free Australian saw these chance encounters culminate in a special Lifeline event on 16 May 2018 at Brisbane’s Parliament House. Hosted by Queensland Police Minister, Mark Ryan, MP, the event launched the 6 minute documentary and simultaneously raised funds for Lifeline. Deeply humbling for Daryl and a career highlight was his announcement during the night as a Lifeline ambassador by Lifeline CEO Bob Gilkes.

The 6 minute documentary on Daryl’s story

Anyone across Australia experiencing a personal crisis or thinking about suicide can contact Lifeline on 13 11 14. This is a confidential telephone crisis support service available 24/7 from a landline, payphone or mobile. www.lifeline.org.au

If you would like to know more about Daryl Elliott Green and his amazing journey, click here to submit your inquiry, or contact us directly on 1300 55 64 69.

Daryl’s keynote can be customised to any audience from corporate to private sector and government.

Daryl is a Lifeline ambassador and in 2018, a short film by director Michael Hanson was launched that is dedicated to suicide prevention. On 1 May 2000, Constable Daryl Elliott Green was on a routine callout when he was ambushed and TWICE SHOT in the face and shoulder. Despite critical injuries and significant blood loss, he drew his firearm and began searching for the gunman. Read more