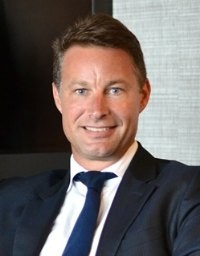 Outside his private business interests, Richard has served as a Board member of The Skills Institute, Waterfront Business Community, Fahan School for girls, Tourism Industry Council Tasmania, and Tennis Tasmania.

Transitioning from a successful career in private enterprise to international corporate life at the age of 40, today Richard heads up hotel development and acquisitions in Australia Pacific for the world's largest hotel group, Marriott International, a New York Stock Exchange listed company.

Following its acquisition of Starwood in 2016, Marriott employs more than 675,000 people and operates 6,400 hotels in 125 countries. The group has 30 leading brands, including Marriott, Sheraton, Ritz Carlton, Westin, W, St Regis, Le Meridien and Bulgari. Illustrating Marriott’s rapid rate of global expansion, the company will open a new hotel - somewhere in the world - every 13 hours for the next three years.

In his approach to helping meet that challenge, Richard draws on his family business roots, and the tough lessons learnt in private enterprise, to contest the status quo with a pragmatic, outcome-focused attitude.

Richard is a dynamic, enthusiastic and experienced MC who is well able to gain the attention of his audience and maintain their interest

Richard is an entertaining, engaging presenter who is highly organised and a joy to work with.

I felt a genuine emotional reaction and sense of awe, not only to the story but also with the manner in which Richard conveyed it. Inspiring.