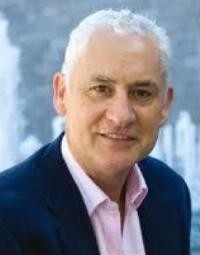 Rob presents combines his scientific knowledge, his skill as a communicator and a visual package second to none to deliver the key messages in climate change and it's impacts, biodiversity issues, resource management and the path to Ecologically Sustainable Development. Because of his extensive experience and depth of knowledge Rob is able to tailor his presentations specifically to the assignment.

Rob Gell is a geographer and specifically a coastal geomorphologist, specialising in the environmental processes that continually shape our coastlines. As such, he has an expert understanding of the Victorian coastline and its formation. Rob completed his Science Degree at Melbourne University in the early seventies. In his professional life today Rob works as an environmental and communications consultant.  He is also a director of a new mobile media and communications company.

Rob taught Environmental Science and Physical Geography at Melbourne State College and Melbourne University. Rob is a Fellow of the Royal Geographical Society and an Inaugural Fellow of the Environment Institute of Australia and New Zealand. He is a member of the Victorian Coastal Council, Chairman of Wildlife Victoria, Chairman of the UNESCO Western Port Biosphere Mornington Peninsula and Westernport Biosphere Reserve Foundation, and a member of the Reference Group for the Commissioner for Environmental Sustainability, Victoria.

He is Patron of the Geography Teachers Association of Victoria, Life Education Victoria, Sustainability Street, and a supporter of Cool Melbourne. He is a Life Ambassador for Australia Day for the State of Victoria and was Environmental Ambassador to the Melbourne 2006 Commonwealth Games.

In 1979 Rob Gell’s Four Day Forecast revolutionised the way television weather information was presented. For thirty-one years he brought innovation, information, credibility, and authority to television news introducing satellite image sequences, integrated pressure analyses and explanation and accountability rather than simply a presentation of Weather Bureau forecasts by a personality. He presented on Eyewitness News from 1979, then National Nine News for sixteen years from 1988 and then with the Seven Network until 2009.

He is a published author and photographer. He has been a local government councillor and was a councillor of the Australian Conservation Foundation for almost a decade. Rob became a director of Greening Australia Victoria in 1997, was President from 2000 until 2008 and concluded three years as national President in 2011.

Rob is a uniquely qualified individual who has the respect of government, business, environmental groups and the community for his approach to sustainable development. Importantly he is also an excellent communicator who can get the message across.