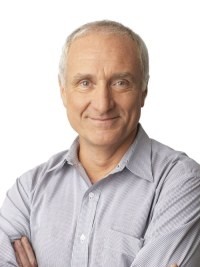 Robyn Williams is a science journalist and presenter of Radio National's Ockham's Razor and The Science Show, one of the longest running programs on Australian radio. In 2015, The Science Show celebrated its 40th anniversary with Robyn at the helm. A fascinating and engaging presenter, he infuses his presentations with wit and humour - and has the enviable ability to make science interesting and fascinating for almost anyone.

Robyn Williams is as prominent on radio as he is on television, having narrated programs such as Nature of Australia and appeared on World Safari with David Attenborough. He has conducted countless interviews with scientists for ABC TV on programs such as Quantum and Catalyst and he hosted a link between leading scientists of Australia and the United Kingdom at the Grand Launch for the Royal Institution of Great Britain, attended by David Attenborough and the Queen.

Robyn Williams was appointed AM in the 1988 Australian Bicentenary Honours list, elected a National Living Treasure by the National Trust in 1987 and even has a star named after him by the Sydney Observatory. Robyn has served in various positions including President of the Australian Museum Trust, Deputy Chairman of the Commission For The Future, and President of The ANZAAS Congress. He is an Ambassador of the Queensland Museum Foundation.

Robyn Williams has written over 10 books, the latest being a novel, 2007: A True Story Waiting To Happen. In 1994, Robyn Williams took up a Reuters Fellowship at Oxford University where he wrote his autobiography And Now For Something Completely Different, in deference to one of his most popular interviews with John Cleese on psychiatry. He has written more than 10 books, including novels.

Although Robyn Williams graduated with a Bachelor of Science (Honours) in England, he admits to having spent as much time acting as he has studying. Early in his career he made guest appearances in The Goodies, Monty Python's Flying Circus and Dr Who and stood in for Tom Jones for four months in his TV series.

A superb communicator whose penetrating interpretations are enhanced by a lively wit, Robyn's unique mix of humour and fact is both stimulating and entertaining.

Robyn was able to match the topic and tone of his anecdotes with the audience, which was a very specific group of people: passionate geologists! It's no easy feat to appeal to a group of specialists, but Robyn nailed it.

Articulate, thoughtful and witty. Robyn was both challenging and entertaining.