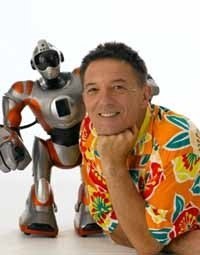 Peter Blasina, otherwise known as the Gadget Guy, appears weekly as the Hawaiian shirt wearing technology reporter on Channel Seven's Sunrise program as well as appearances at technology events and expos. He travels widely to research the latest market dynamics, developments and trends in the converging area of IT and broadcast media. He has attended numerous industry conventions and technology exhibitions around the world, and is often called upon as an industry spokesperson because of his in-depth knowledge and incisive understanding of the technology industry and areas of social media, and business communication via the latest innovative releases of technology.

Peter is also, widely recognised as one of Australia’s foremost commentators on technology developments. A veteran of the Australian Hall of Journalism, Peter's contribution to a high standard of IT journalism is acknowledged locally and globally. He is a well-known face and voice in mainstream newspapers, key technology magazines, and on broadcasting vehicles such as ABC Radio, Channel 7's 'Sunrise' program, and formally on Channel Nine.

His weekly segment on Sunrise, profiles new technology and explains the background to the way different technologies are being integrated into the average consumers’ lives as well as providing technology advice in a simplified manner with a target audience of average consumers rather than technologically savvy users. He has also appeared regularly on the Small Business Show, Channel 7, providing advice to small business owners on affordable options to enhance new small businesses.

The rapidly changing landscape of technological innovation is Peter's area of expertise. He regularly reviews and analyses a broad range of communications, computer, video and multimedia products. Peter is a recognised expert on the emerging field of technological convergence. With his media and technology knowledge, his insights are relevant and reliable. His trademark Hawaiian shirt is another innovation!