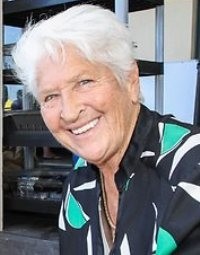 Swimming champion Dawn Fraser is an icon to many Australians. Known for her 'larrikin character' Dawn Fraser's sporting accomplishments are never likely to be repeated.

In 1998 Dawn was included as one of Australia’s National Living Treasures. In 1999, she was awarded Athlete of the Century at the World Sport Awards and awarded Athlete of the Century by the Sporting Hall of Fame. In the same year she received an Order of Australia for ‘service to the community, particularly as a sports consultant and administrator, and through organisations for people with disabilities, and to the environment.’ She was a torchbearer in the Opening Ceremony at the 2000 Sydney Olympics and she remains one of Australia's best-loved identities.

Dawn has since maintained an active role in the sporting and wider community as a member of the Cerebral Palsy Sports Association, a Patron of the Wheelchair Sports Association of Victoria and Vice President of the World Association of Olympic Winners, while continuing to support sporting clubs across the country. She is a member of the NSW Sports Advisory Board and the Sydney Cricket Ground Trust and is a Director of the Wests Tigers Football Club and Balmain Leagues Club.

Dawn was one of the contestants in the 2005 season of the Seven Network's Dancing with the Stars and her profile has once again been raised, as a competitor on the 2013 season of Australia's Celebrity Apprentice.