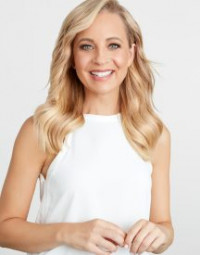 Carrie has been co-hosting Network Ten’s The Project for the past six years. During that time she has delivered live news ‘but not as you know it’ to homes across Australia. She has travelled the world for stories including the 10th anniversary of 9/11 in New York, interviewed celebrities such as Brad Pitt, Will Ferrel and Sarah Jessica Parker. As well as falling over live on air.

Carrie’s popularity has grow to such an extent she received a TV Week Logie Award for Best New Talent, and was nominated for a Gold Logie. Carrie was honored to receive the Silver Logie for Best Presenter and also be awarded the Gold Logie for Most Popular person on television. Carrie used this opportunity to raise awareness for Brain Cancer, encouraging everyone to get involved and wear a beanie for brain cancer. The response was overwhelming!

Before her work on The Project, Carrie was on Rove for four years and a member of the top rating breakfast radio team with Nova FM. Carrie is also the proud mother to her wonderful son, Ollie and beautiful new baby girl, Evie.

Carrie has always loved drama and dancing. A Vice-Dance Captain at school, she took ballet and jazz classes for 10 years and regularly made appearances in Rock Eisteddfods. These days Carrie is always the first on the dance floor at any wedding.

Carrie believes in giving back to the community and donates her time to many charity events and causes. She is the Australian ambassador for UNICEF (neo-natal tetanus program), and The RMH Neuroscience Foundation, one of the leading research centres investigating the causes, complications, treatment and prevention of brain diseases.