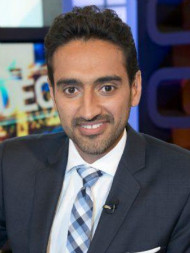 Waleed Aly is one of Australia’s most respected and versatile media talents. He is a broadcaster, author, academic and musician. Waleed is co-host of network TEN’s The Project, live to air weeknights.

Waleed has tackled comedy as both a writer and presenter for SBS’s Salam Café, along with hard-hitting news as a host of ABC radio’s Mornings program in Melbourne. He has presented sporting analysis on ABC News 24’s The Drum, and political analysis on Q&A and BBC World. In 2010 he hosted The Late Session for SBS, a lively talk show set in a dinner party environment canvassing a wide range of contemporary topics. Through this as well as regular appearances on Offsiders, Meet The Press, The 7.30 Report and Enough Rope with Andrew Denton, Waleed has become widely recognised and trusted by audiences across Australia.

In 2005, Waleed was made a White Ribbon Day Ambassador for the United Nations’ International Day for the Elimination of Violence Against Women, and was named one of The Bulletin magazine’s ‘Smart 100’ in 2007. He was invited participant to the Prime Minister’s 2020 Summit in 2008 and in 2011 he was named Victoria’s Local Hero in the Australian of the Year Awards for his work in fostering cross cultural understanding in the community.

When he’s not broadcasting or writing, Waleed is probably doing something musical. Waleed is the guitarist and main songwriter for Melbourne originals band Robot Child. He played the lead guitar in the world’s first ever theatrical production of Pink Floyd’s classic album, The Wall with Nuworks Theatre in Melbourne, in the process helping to raise $60,000 to rebuild a girls’ school in Afghanistan that the Taliban had previously destroyed. He also played guitar on Storm, a song he co-wrote live on air with Sony-signed Australian artist, Shelley Harland.

Waleed is almost certainly the only terrorism expert in the world to have written a formal harmonic and structural analysis of Queen’s Bohemian Rhapsody. He made his Melbourne International Comedy Festival debut in 2013 alongside Charlie Pickering in ‘The World’s Problems Solved with Charlie Pickering and Waleed Aly’.

Waleed was Radio National’s Drive show host from 2012 for three years, co-hosting The Project on Friday nights during this period. Currently he presents The Minefield on Radio National with ethicist Scott Stephens every Wednesday morning.

Waleed is a lecturer in politics at Monash University, working in their Global Terrorism Research Centre.