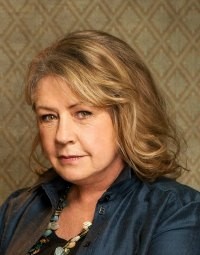 Noni Hazlehurst began as an actress in television serials produced by Crawford Productions. She initially played the ongoing role of Sharon Lewis in The Box in 1975 before joining the original cast of The Sullivans as Lil Duggan in late 1976.

In television, Noni won another AFI Best Actress award for Waiting At The Royal, played leads in The Shiralee, Nancy Wake, Waterfront, Ride on Stranger, Stepfather of the Bride and Curtin, and currently stars in the second series of City Homicide.

Theatre credits include Frankie and Johnny in the Clair de Lune, On Our Selection, Cut and Thrust Cabaret (in London’s West End) and for the STC: Hamlet, No Names No Pack Drill, The Man From Muckinupin, The Conquest of Carmen Miranda, Precious Woman, Navigating, the 2003 sell-out season of Breath of Life, and in 2006, Woman In Mind.

A loved member of the Playschool team for over 20 years, Noni then hosted Better Homes and Gardens for 10 years, during which the program won five Logies. She has co-hosted the Logies, directed the AFI-nominated telemovie The Fish Are Safe, (ABC), and has had extensive experience in writing, comedy, radio, singing, education programs, presenting, and recording.

Noni has won a Variety Club award for Achievement in Television, a Critics’ Circle Award, two Film Critics’ Awards, and the Flinders University Convocation Medal. She received an Order of Australia in 1995 for services to children and children’s television and recently, an Honorary Doctorate of Philosophy from Flinders University (SA).

National Ambassador for Barnardo's for four years, and an ambassador and patron for numerous child welfare organizations, Noni has served on several boards, including Film Australia and Belvoir St Theatre Co.