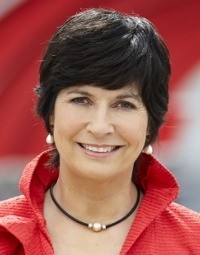 Dr Judith Slocombe graduated as a veterinarian from the University of Melbourne, and after practicing in Australia and overseas commenced a small veterinary pathology business from home.

Judith went on to create a completely new business model which redefined veterinary diagnostics in Australia and she grew her small business into the largest veterinary diagnostic group in Australasia. When Judith sold her business and in 2001, her dedication and vision earned had her Australia’s most highly regarded award for women in business Telstra Business Woman of the Year.

Judith graduated with an MBA from the Melbourne Business School in June 2002.

Her transition from small business owner to senior corporate manager was complete when she was appointed Group General Manager of a large medical diagnostic business, with a budget of over $200 million, 2500 employees and with laboratories throughout Australia, New Zealand, Malaysia, India and Singapore.

In 2003 she was awarded a centenary medal for service to Australian society in business leadership.

Judith has also been CEO of The Alannah and Madeline Foundation being an advocate for the safety and well-being of children who have experienced or witnessed serious violence.