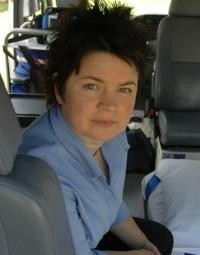 Katherine Howell is a bestselling author whose books, based on Sydney Detective Ella Marconi, are best sellers on three continents. Katherine is an experienced speaker who talks of her journey from paramedic to author, including the difficulties involved in making that change and the importance of following your dream.

Katherine Howell worked as a paramedic for fifteen years while completing her Bachelor and Masters degrees in creative writing. Her first novel Frantic, published in 2007 by Pan Macmillan, set a paramedic alongside Sydney police detective Ella Marconi in 'an adrenaline rush of a thriller' (Sydney Morning Herald). It won the 2008 Davitt award for crime fiction and was published in Australia, New Zealand, the UK, Canada, France, Germany, Italy and Russia.

Her second book The Darkest Hour, continued the pattern with Ella and another paramedic in a story described as a 'compelling drama ... (with) an unnerving ring of truth' (Woman's Day) and was likewise published in a number of countries. Her third in the series Cold Justice, was released in Australia in early 2010 (winning her another Davitt award), her fourth, Violent Exposure, in December 2010 and a fifth, Silent Fear in February 2012.

Her books are highly regarded by both her readers and the critics for their attention to detail and their high degree of psychological insight. Katherine’s books are published in multiple countries and languages and have been likened to the work of Karin Slaughter and Patricia Cornwell. Katherine is studying female doctor investigators in crime fiction for her PhD at the University of Queensland, and teaches writing and editing.