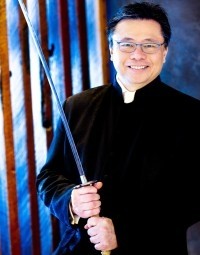 Ron Lee, CSP*, “The Corporate Ninja”, speaks at conferences and trains and consults to executives and sports people globally. The keynotes, consultations and master classes come from Eastern/Western Philosophies, Metaphysics, Martial Arts and the Performing Arts.

Ron was a regularly-invited lecturer in Verbal Communication at UNSW. Ron recently trained a woman who, two weeks later, won the first of five world championships in her Olympic sport and later that year won the Australian Institute of Sport Athlete of the Year.

He trained Susie Maroney before her swim from from Miami to Cuba. Ron also trained an accountant who took up dragon boat racing and soon after represented Australia in the world championships in China and came second by one four hundredth of a second.

Ron Lee, CSP*, “The Corporate Ninja”, is a TEDx Speaker who delivers conference keynote presentations at and trains management up to Executive Chair level globally. The keynotes, consultations and master classes are drawn from Eastern/Western Philosophies, Metaphysics, Martial Arts and the Performing Arts. He studied at the NIDA, where Cate Blanchett, Sam Worthington and Mel Gibson also trained, and still occasionally acts professionally.

For nine years, Ron was a regularly-invited lecturer in Verbal Communication to final year undergraduates at the University of New South Wales. In 1986, Ron appeared on the television programme, “Star Search” performing stand-up comedy, doing four shows. After a couple of weekend spots at The Comedy Store, he started speaking exclusively at corporate events.

He has also addressed academic audiences, one of which was to transplant surgeons’ on “The Role of The Mind & The Spirit in Healing” and “Metaphysics in Relation to Science & Medicine”. That presentation was publicly validated and endorsed by a Professor of Surgery.

Ron recently trained a woman to five world championships in her Olympic sport, and through using his philosophies and methods, his clients have easily exceeded their business, private and sporting personal bests.

Acting, comedy, and 30 years and eight forms of martial arts, qualifies Ron to speak on personal power. The presentations are high-impact, interactive, fun and memorable experiences that stay with people for years.

As the result of his presentations, participants:

1. Become more solution-focused
2. Are inspired to raise levels of their expectation of their performances, both
personally and in teams
3. Are conditioned to be focused in the same direction with less politics.
4. Have a great time.

Organisations will increase team, stakeholder and channel partner engagement, retention and revenue. He facilitates the performing arts-based “SPEAK! Taking Your Privates Public” that trains you to present better than most professional speakers.

Ron has been consulted by the CEOs of some of the top 100 corporations in Australia, New Zealand, USA, Canada, Asia, Scandinavia and Europe as well as politicians and sportspeople.

* The “CSP” designation represents the top 7% of professional speakers globally.

Your ability to make the 280 delegates think, act, react and enjoy was talked about for long after the Conference. Your input and knowledge imparted have become part of everyone’s daily routine.

there is no doubting the impact of your presentation…there are a good number of people who have broken their own psychological barriers and seen ‘beyond the problem’ which will no doubt have a positive impact on the way they do business for the future.