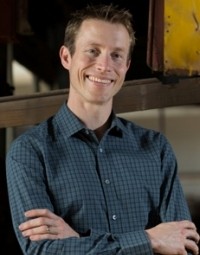 James Chin Moody (formerly known as James Bradfield Moody when he was a panel member of the ABC Television show The New Inventors) is the Chief Executive Officer of TuShare, a company with a vision of creating the world’s largest community of users sharing goods to help them reach their full lifespan. i.e. connecting used goods with new owners - saving money, helping others and minimising landfill waste.

In James' latest venture he has created, and closed a $1.8 million funding deal for, Sendle, a courier service focused on improving the experience of sending a parcel for consumers and small business customers. Sendle is a spin off the logistics and fulfilment component of his used goods swap site TuShare, which requires couriers to take parcels from one consumer to another.

Prior to TuShare and Sendle James was the Director, Divisional Business Strategy at the CSIRO Division of Land and Water, the largest water research and development organisation in Australia.

James is passionate about the supporting role that young socially conscious businesspeople can play in society. He actively works towards communicating these views to the general community and makes regular appearances at industry conferences, schools and other events.

He is a member of the Federal Government’s National Environmental Education Council. He believes that issues such as sustainability and environmental management are only going to become more important in society.

James was known as James Bradfield Moody when a panel member of the ABC Television show “The New Inventors”. Bradfield is his middle name, named after his great-great uncle JJC Bradfield, the designer of the Sydney Harbour Bridge. The Chin name is adopted through marriage.