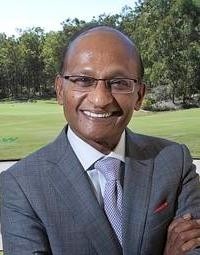 Maha Sinnathamby is one of Queensland’s modern-day success stories. From incredibly humble beginnings in a small war-torn Malay village, Maha is now better known as the visionary developer behind Greater Springfield, a master-planned community (the 2010 World's Best Master Planned Community as awarded by the International Real Estate Federation) on the edge of Brisbane that will one day rival the size of Darwin.

While the range of obstacles he has overcome on his way to the top are many and varied, the principles for his success have always remained the same. These principles are much more than a how-to guide for business success – these incredibly personal messages of positivity and self-belief are perfect for anybody wanting to discover how to achieve their own goals.

Maha's story is one of failures, success and failures and success and how to persevere against great odds. Maha is an inspirational and engaging speaker who is surprisingly thankful for the challenges that his simple upbringing and life’s challenges have presented him. He is a firm believer that adversity and hardship has ingrained in him a resilience and mental toughness to face every hurdle that life presents; without which he may well be quite a different person.

As Chairman of the Springfield Land Corporation, Maha's goal is make a difference in society by creating a master-planned community where people can live, learn, work and play in a city fully supported by high quality infrastructure, commercially viable development and sustainable development. Springfield is founded on the cornerstones of health, education and technology. Education at all levels is the cornerstone of his strong commitment to fostering social justice and social progress through adding value to individuals and increasing their potential as people.

Springfield is presently 15% developed and, at completion, the CBD of Springfield will be twice the size of Brisbane’s CBD. To date, Springfield has directly and indirectly experienced a $9.6 billion expenditure and is moving at a rapid pace.

Maha holds a Bachelor of Engineering from the University of New South Wales and has worked for the World Bank and Asian Development Bank. He is also directly involved as the major shareholder in more than $15 billion worth of projects throughout Australia.

Though never the goal, Maha has been recognised with many accolades, including: an honorary doctorate from the University of Southern Queensland; a Centenary Medal for contribution to Regional Development; the 2003 Ernst and Young Master Entrepreneur of the Year (Northern Region); the Paul Harris Fellowship from Rotary International; Australian Institute of Management Medal for Management Innovation; and the Global Organisation for People of Indian Origin International Renowned Entrepreneur Excellence Award.

Maha was also named in BRW's list of wealthiest individuals with a net personal wealth of $820 million. But it has never been the acquisition of wealth that drives Maha. His mantra is “chase success and money will follow” as he firmly believes that chasing money will not grow a person. He is very heavily committed to uplift society.

If he didn't seem busy enough, Maha also holds many leadership and committee roles outside of the property development industry. He has released a book "Stop Not Till the Goal is Reached" in which he shares his 10 principles for fearless success.