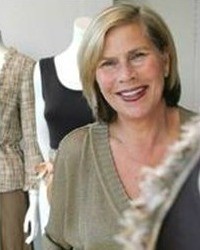 Margaret Porritt was the founder and designer of Feathers - the highly successful chain of fashion stores. Her success was built on her passionate belief in customer service and her ability to look for opportunities in change. After a stint working in London for Norman Hartnell, the Queens' dressmaker, Margaret joined a popular chain of stores. She quickly realised she would be better off as an employer rather than the employee and after six months, the boutique where Margaret was employed, belonged to her. She then went on, to create her brand Feathers. Now in its 40th year, and like Porritt, the brand is as strong as ever. Margaret credits these results to knowing the customer, quality product and backing in production her best selling garments.

Within a year she acquired her first store she had a second and continued to build a strong customer base. These boutiques were subsequently re-named Feathers and stocked only Australian designer labels. With seven boutiques in the Melbourne, Sydney market, and moved to nationwide.

The chain continued through the 1980s, peaking with eight boutiques in the Melbourne CBD and creating a niche that appealed to the city worker. The name Margaret Porritt became a brand in itself.

However, the recession in 1989 placed pressure on the business which saw Margaret consolidate the business by retaining only her strongest stores. It was also at this time that Margaret felt it was time to manufacture her own range of clothing, Feathers by Margaret Porritt.

And with this new focus and drive this already established business woman created a brand, re-built her chain of stores and continued to raise her profile as a leading Australian designer and retailer. This was cemented when Margaret made a decision to go against tradition and appear in her own advertising campaign. Margaret, a woman who is over 50 and wears a size 14, has created a range for women to relate to, stating: 'I couldn't find them so now I design them'.

Margaret's achievements were recognised in 1998 when she was the winner of the Victorian Telstra Business Owner Award and was subsequently inducted into the Business Women's Hall of Fame. She won the Metropolitan Fair Trader of the Year award for excellence in customer service in 2009, and was a finalist in the Telstra Small Business Awards and winner of a regional award at the Australian Retailers Association of Victoria (ARAV) Awards in 2003. In 2007, Feathers won Ragtrader's Retailer of the Year Award for a Fashion Chain with Under 20 Stores.

Margaret's belief in the necessity of reinvention in moving forward saw the launch of f-line by Feathers in 2002, for which she recruited the expertise of her now daughter-in-law Lanette (then an independent designer living in New York), who assisted in the creation of the directional and dynamic designs. f-line's aim is to provide a diffusion label to broaden the company's appeal.

For over 40 years, Margaret continues to be at the forefront of all facets of the business. Feathers employs over 55 staff.  You'll often find Margaret serving the customers, gathering feedback and developing new ways to work her business. Designing for the customer is still a prime focus as she continues to create ageless designs for every woman.