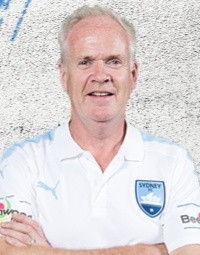 Mike is the Founder and CEO of XVenture, a unique learning, leadership and media group. TV Director, writer, business leader, clinician and mental coach to elite sports stars, senior executives and entertainers. He is known for his “can do” unconventional and passionate approach in creating cutting- edge individual and team learning programs globally.

Mike has a rare mix of experience and skills having spent many years in Board and Senior positions at Deloitte, EY, Spartan Sports, Standards Australia, Central Coast Mariners and with The Wiggles. Originally from Manchester he studied social sciences majoring in health management at Sheffield Hallam University. His dissertation on Maslow theory, self-actualisation and health education in schools set the tone, and fascinated by health and his studies in psychology and organisation and behaviour theory, he then trained in health planning and in particular mental health services and people management at Hackney, St. Bartholomew’s, King’s College and Bethlem Maudsley Hospitals in London. He completed an MBA at Lancashire Business School once again majoring in health and took a position building the Health Practice at Ernst and Young in Manchester, and with Ernst and Young, he came to Australia to help on the organisational, systems and behavioural changes relating to the move of Camperdown Children’s Hospital to Westmead plus other major health projects including the redesign and organisational change of health services in Northern Territory, rural WA, Cairns Brisbane and Taranaki in New Zealand.

Following senior health roles at Ernst and Young he took an executive position at Standards Australia, leading strategy and responsible for the welfare of over 600 people as Head of Human Resources. In this time, he took the lead in delivering risk management programs back into the National Health Service in England. This included the development and delivery of unique experiential programs for staff growth and development some of which became landmarked in Australian business.

In his ten-year tenure time at The Wiggles, for the most part as MD, he became well known for his global innovation on brand building around people and learning and consistent mentoring of high-profile people in business, sport and entertainment in many corners of the globe. This included advice and support to Cricket Australia’s emerging group of coaches through regular strategy sessions and similar to the armed forces emerging officers. It was at The Wiggles that he forged a relationship with Steve Waugh helping him to develop his Foundation for Kids with Rare Diseases and also becoming a Board member at the Central Coast Mariners, a position he held for two seasons.

In 2012 Mike added to his skill set by undertaking and successfully completing formal clinical study in hypnotherapy and strategic psychotherapy and supplementary programs in neuro-linguistics and past regression techniques. He is registered as a clinical hypnotherapist in Australia, is up to date with clinical supervision, professional indemnity and regularly undertakes one on one clinical work in this field when necessary.

His huge experience and formal qualifications enable him to support individuals and teams from all walks of life, be it senior executives, elite sports people, world class entertainers achieve amazing things. He has most recently been described as “the coache’s coach.”

He is fascinated with the connection between the brain, behaviour and individual and team decision making and is on the cutting edge of work in the field of emotional agility, resilience, leadership and anxiety management.

Over the last 5 years, XVenture has worked with over 5000 people from industries and countries far and wide, lifting the ceiling on individual performance, often blending experiential programs and state of the art audio visual media to affect people’s performance. This has been seen in numerous places including the XVenture Family Challenge TV show on the Three network (NZ) and the XVenture Corporate Challenge on One HD; his work ears for three years an Adjunct Professor at Macquarie University’s Graduate School building unique leadership programs; the development of the unique audio visual and app program on leadership (100 Leaders) including interviewing individuals such as Dr. John Morris, Ronnie Kahn, Meat Loaf, Richard Deutsch, John Reid, Rory Steyn, Eliot Kennedy, Kym Johnson, Laura Geitz and Steve Waugh; his advice and support to coaches and elite sports people from rugby, netball, equestrian, track and field, cricket and soccer; the global dance show Burn the Floor.

More recently he has brought neuroscience techniques into the mix working with Cognisens of Montreal on the use of 3D multiple object tracking to improve decision making and most recently trialling virtual reality technology for learning.

The latest work has included introducing NSW schools Principals and teachers and leaders at University of Wollongong on the practical application of emotional intelligence into the classroom and working life.

In 2016 he was appointed as Emotional Intelligence, Resilience & Leadership Advisor to Sydney FC, and in the two years the team broke every record in soccer in Australia. This work has since translated into working with a number of the national team players including EPL goalkeeper Matt Ryan, Trent Sainsbury and Matt Jurman. In September 2018, Mike was appointed as the Emotional Agility and Mind Coach for the Australian National Soccer Team.

In 2017 he was named Australian CEO of the Year by APAC Insider Magazine.