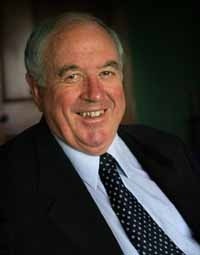 John Anderson was born in Wellington New Zealand, at the age of 22 he left New Zealand for the United Kingdom on a one year 'Overseas Experience'. He returned some 20 years later with his wife Alison, four children and an international business - Contiki Holidays.

After a few months in London, John Anderson’s desire to see Europe was overwhelming but he had insufficient funds to achieve this. With just 25 pounds he found a way to not only see Europe, but start his own business. He created one of the world’s leading tour operators (the largest catering for 18-35 year olds)! When John sold the company a few years ago it was firmly established as an international ‘brand’ name. He had built brand awareness of 92% in target markets and Contiki was operating in Europe, North America and Australasia, carrying 100,000 passengers annually. To date over 2 million young people have travelled Contiki including over 1 million Australians!!

Determination to succeed, the belief in himself, his successes and failures; are key topic areas of John's presentations. His aim is to inspire, engage, entertain and provide his audience with valuable personal and business messages. These include reference to taking calculated risks, branding, sales and marketing, innovation, teamwork, training, quality, competition and change, to mention just a few.

John Anderson also conceived the idea of ‘The Ellerslie Flower Show” which is now firmly established as the largest event of its kind in the Southern Hemisphere. John travelled to London and met the “Chelsea Flower Show” organisation who assisted him with the development of the New Zealand show. He was the inaugural CEO with the event attracting over 100,000 visitors in its first year!

He has also written an inspirational book 'Only Two Seats Left' sharing his story.

John's presentation was not only outstanding, but was considered by many to be the highlight of the entire event. John's story was informative, entertaining, and moving leaving us inspired and emotional. John more than exceeded all our expectations. 10/10.

Extremely well received, did his research and fine tuned his address which had tremendous relevance, delivered powerful messages to a diverse mix of professionals and academics, he has a great sense of humour - outstanding!