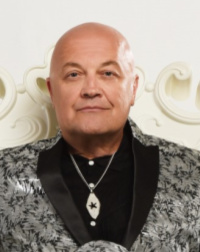 Renowned for his powerhouse performances and electric stage presence, Adam continues to live up to his reputation as the ‘consummate entertainer’, captivating the young and not-so-young with his boundless energy and undeniable desire to connect with his audiences.

Adam has channelled this energy and desire towards initiatives with a higher purpose, creating a platform for using music to unite and empower groups of all ages through his bespoke program, MusoMagic. Twenty years and hundreds of workshops, songs and videos later, from corporate groups, schools and remote indigenous communities, it has inspired thousands of people around Australia and the globe, spawned a children’s television series and a charity, MusiKarma, which helps young people to create their best possible future.

Throughout his life, Adam has recognised the power that music holds to transcend barriers, unite people from all walks of life and to communicate when words alone aren’t enough. With his strong commitment to social responsibility he endeavours to use music as a force for good, both in business and in service. Hence his mantra for MusiKarma: ‘Play It Forward’, which leads him to mentor young people and provide opportunities for personal and professional development.

Without a doubt, the best team builder we've ever done!

Thank you to you and the team for providing such a dynamic, strategic and engaging team building activity...