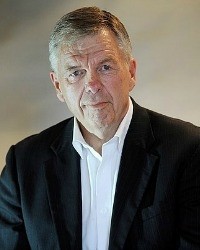 Graeme Alford was an extremely successful lawyer in the 1970’s who totally lost his way as his alcoholic addiction took over. His fall from grace was as quick as it was stunning and he found himself in jail not once but three times, the last being for armed robbery. He had reached a point in his life where the choice was simple. Give Up or Get Up!

Since 1990 he has headed up his own business which has brought out to Australia many international business authorities including Tom Peters and Stephen Covey the author of 7 Habits of Highly Effective People. In 1997 Graeme brought to fruition what many thought was the impossible, the inaugural World Masters of Business. In excess of 16,000 Australians heard for the first time ever General Schwarzkopf with Lee Iacocca. In 1999 he was responsible for the first ever visit to Australia by Mikhail Gorbachev the former President of Russia and in the year 2000 was responsible for Nelson Mandela and Rubin Hurricane Carter’s visit to Melbourne.

Graeme featured on Channel 2’s Australian Story where he was referred to as the Comeback King.

Graeme is in recovery from his addiction to alcohol and has been abstinent for over 30 years. He attributes his recovery from alcoholism to his permanent connection to the 12 step model of recovery and his acquiring of the tools needed to rebuild his life.

Graeme is a customer service expert and has presented hundreds of keynotes and organised and worked the same amount of workshops, all focused on delivering fantastic customer service in Australia, South East Asia, and the United States.

As a speaker, Graeme is a valuable addition to the program, especially for organisations with in the service industry, including retail, tourism, hospitality, and restaurants. Graeme has worked with many of the top 500 companies in the world personally, training employees and managers, on how to give exemplary customer service.

A certified speaking professional, Graeme set up the Australian Customer Service Association in 1990 after spending several years working for Budget Rent-a-Car, and since then has made a name for himself as Australia’s authority on customer service. He served on the board of directors for the Customer Service Training Corporation, and to date writes a monthly newsletter titled Customer Service Update.

Always looking to share his knowledge, Graeme is the author of the video series Legendary Customer Service, and is a columnist for the Customer Service Bulletin. His book, Stop Sucking on Lemons, is considered an all-inclusive, industry staple. Focusing on everything a new or seasoned employee or business owner needs to know about customer service, this book is considered a must-read by some of the world’s biggest companies.

Graeme Alford has worked with some of the top 500 companies in the world personally, training employees and managers on how to give exemplary customer service. Whether a company caters to a small town or an international base, Graeme’s techniques can always be applied, improving sales, loyalty, and the customer’s experience.

Graeme's presentation was spot on for our audience. His tone, content and overall message hit home with each participant at our conference and perfectly matched the tone of our conference. Our staff are still raving about how inspired they were after Graeme's talk.

Graeme Alford was excellent, he prepared specifically for our conference and took time out to visit agents from our network to gain an understanding of wants and needs. All delegates attending his one hour workshop not only gained information to take back to their agencies but also enjoyed his workshop. Highly recommend.

Many of our delegates thought Graeme was inspirational and that our Conference theme of Never Give Up was just perfect for where we are at the moment. Others thought Graeme was the highlight of the Conference. An energetic, charismatic character who has our people changing what they do in their business and personal lives immediately by adopting the Mental Toughness principles. He delivered!