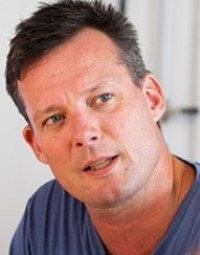 Two short words that let us put off until tomorrow what we’d really rather be doing today. Two short words that lead so many dreams to go unfulfilled. Like all of us, Ben had a "one day" list in his mind until, diagnosed with cancer at age 33, he realised that if one day was ever going to come, it had to come today. He kicked cancer's butt, wrote a book about it, Lessons from My Left Testicle, which was featured as Book of the Week on 2UE, then threw a highly paid advertising career to the wind to start Republic of Everyone, Australia's (and one of the world's) first sustainability strategy and communications company, working for companies and NGOs as diverse as Lend Lease, Origin Energy, News Corp, Greenpeace, Amnesty and the UNHCR to find new ways to convince people that business can make money and create a better world.

In three short years he has won the NSW Dept of Environment and Climate Change's Green Globe Award twice, created the global, multi award winning Tails for Whales, co-founded the Garage Sale Trail and featured on Gruen Nation as the creator of that ad for the Greens.

He is a spokesperson for the Cancer Council and has been recognised with an Action Award from the International Fund for Animal Welfare, an honour he shares with Jamie Oliver. Ben speaks on inspiration and overcoming adversity, using social media to create social change and how with the right message you can sell an environmental concept to even the toughest sceptic.