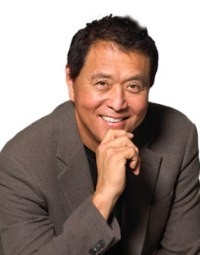 Robert T. Kiyosaki is best known as the author of Rich Dad Poor Dad. This is the #1 personal finance book of all time, which has challenged and changed the way tens of millions of people around the world think about money.

His book titles hold four of the top ten spots on Nielsen Bookscan List's Life-to-Date Sales from 2001-2008 alone. In addition, Robert has been featured on shows such as Larry King Live, Oprah, The Doctors, Bloomberg International Television and CNN.

With perspectives on money and investing that often contradict conventional wisdom, Robert has earned a reputation for straight talk, irreverence and courage.

The philosophy of Rich Dad was built from a simple lesson learned by Robert Kiyosaki at an early age. He had two dads – one rich and one poor.

Robert's poor dad, his natural father, was highly educated, the head of the Hawaiian school system, and enjoyed a decent salary. Yet, he constantly complained about having being broke and continually said, "I can't afford it."

Robert's rich dad, his best friend's father, was a high-school dropout building a business. He wasn’t wealthy. Yet, he constantly enjoyed the finer things in life and always asked, "How can I afford it?"

The contrast between Robert's two dads taught him a great lesson. Robert realised his poor dad's outlook suppressed his dreams and closed his mind to the possibility of financial freedom. He died penniless and full of regret.

His rich dad's outlook elevated his dreams and opened his mind to life's possibilities. He achieved great wealth, financial freedom, and enjoyed life to the fullest.

Both were good and highly capable men. But only one lived richly.