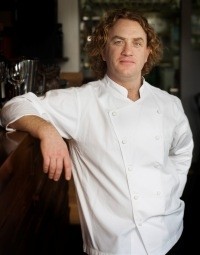 Adrian Richardson is owner and head chef at the successful and bustling La Luna in North Carlton where he has been serving up clean, fresh and innovative food since 1999. He has shared his passion through his acclaimed book “MEAT” published by Hardie Grant which was nominated for the best designed cookbook at the Australian Publishers Assoc Design Awards for 2008 and was included in Melbourne's Herald Sun “Best Books of 2008” feature. MEAT was given a face-lift and re-released in September 2009 and Adrian’s second book "The Good Life' was published in 2011.

Adrian is increasingly becoming a regular on our TV screens. He is co-host on the third series of “Good Chef Bad Chef” airing for 65 episodes starting January 2011 on Network Ten. He also co-hosted with close friends Gary Mehigan, Manu Feildel and Miguel Maestre in the hit series “Boys Weekend” which now airs in over 100 countries.

Adrian also had his first solo TV series “Secret Meat Business” air on the Lifestyle Channel in 2011 and he appeared in a guest chef challenge and the finale episode of “Masterchef Australia”. In addition to Adrian's other TV credits, he is also a regular guest on Channel Ten's “The Circle” and was a regular Chef on Ten's “9am with David & Kim” and hit TV series “Ready Steady Cook” for the first three seasons. In 2006 he appeared alongside Tobie Puttock in “Jamie's Kitchen Australia”.

Adrian's restaurant La Luna Bistro, even received a personal endorsement from Jamie Oliver himself in front of a live audience of 6000 people, in Melbourne during Jamie's live tour (Sept 2006).

Adrian is a fantastic presenter and in September 2009, he was invited to New York, where he participated in the Taste of Tennis at the W Hotel New York and then held a successful sold out dinner at the James Beard Foundation. Adrian inherited his passion for cooking from his Grandfather and has a simple philosophy with his food, which he calls “modern Mediterranean” - that is to use the freshest ingredients and keep it simple.