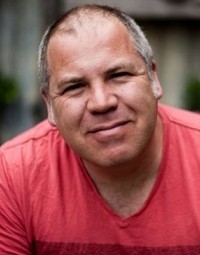 Richard Cornish is a Melbourne based food writer, author and events host.

He is well known in the food scene as an independent writer and commentator on food issues and an affable and humorous host and presenter.

Richard was the acclaimed commentator on the 7 Network series Iron Chef Australia and is a regular contributor to the Sydney Morning Herald and The Age’s Good Food section in which he writes the popular and humourous Brain Food column. He has written four cook books on Spanish cuisine with Spanish born chef Frank Camorra. He has written another cookbook on Spanish food and one on Mexican food for publisher Gourmet Pilgrim. He is a frequent contributor to Gourmet Traveller Magazine.

A former comedy writer and TV producer Richard has found his calling in writing about food, where it comes from, how it is grown and how it enjoyed. He is has been employed by top tour company APT to host Captain’s Choice Tours in Europe, is the author of My Year Without Meat and co hosts the comedic food and wine podcast The Hungry Gentlemen.