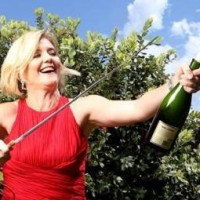 Amanda lived for many years in France where she developed an interest in wines and champagnes with her French husband. Her understanding of wine making was enhanced by regular visits to winemakers in the Loire Valley, Burgundy, the Rhone Valley, Languedoc-Roussillon and Champagne (for which she has a particular passion).

Countless tastings over the years have also served to develop her palate.
During her time in France, Amanda became inducted as a ‘Chavalier-Sabreur’ (sabering knight) with the Confrerie du Sabre d’Or, an association founded to promote the enjoyment of drinking champagne with the Art of Sabrage.

Back in Australia since 2006, Amanda and her husband have developed ‘The Truffle Man’ a gourmet food and wine business and import specialist foods and small producer wines and champagnes from France. They supply many high end restaurants in Queensland and other states, and have a loyal on-line retail following.

Amanda is passionate about educating the public about champagne and wines, and her background in marketing enables her to promote it strongly, particularly though social media and private events.

In August 2014, she was chosen as a finalist in the Professional Division of the prestigious Vin de Champagne Awards in Australia recognising her knowledge of champagne to be one of the best in the country.