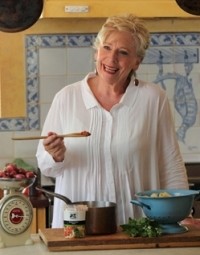 Based in South Australia's Barossa Valley legendary Maggie Beer is a self-taught cook, food author, restaurateur and food producer. She co-hosted the cooking show 'The Cook and the Chef' with Simon Bryant, and is often seen as a celebrity guest judge on MasterChef.

She and her husband Colin, established the Barossa Pheasant Farm Restaurant in 1978. This became famous for serving locally raised pheasant, along with a high quality paté known as Pheasant Farm Paté. The establishment of the Pheasant Farm was the start of a career that now spans farming, food production, exporting, food writing and television presenting.

Maggie's hands-on and approachable style have won her a legion of fans and awards that range from Best Regional Cookbook in the World Cookbook Awards (for Maggie’s Farm).  She has written ten books in total, and Maggie has made numerous appearances on MasterChef Australia, setting new ratings records for the episodes she featured in. Maggie's latest television venture saw her join Matt Moran as co-hosts of The Great Australian Bake Off.

In 2014, Maggie was thrilled to find herself starring on a postage stamp as one of the winners of the Australia Post Australian Legends Award.  In this year she also established her own foundation; Maggie Beer Foundation, to provide the pleasure of a good food life for all, regardless of age or health restrictions. The nutritional welfare of those in aged care facilities has been an ongoing concern of Maggie's for a long time, and she is so happy to finally have found the time and people to support her passion.

Maggie was recently awarded the prestigious Legend Award at the Good Food Guide Awards 2019 for her long-standing contribution to the nation's culinary scene.