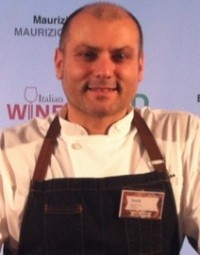 He draws on his childhood in southern Italy and his professional experience in kitchens across Europe, including London, Rome and Marseille.

Danny was awarded both a Chef’s Hat, and ‘Best Formal Italian Restaurant’ in the Restaurant and Catering Association Awards for three consecutive years at L’Unico Restaurant (Balmain, Sydney).

Then at Lo Studio in Sydney’ Surry Hills  he was awarded a Chef’s Hat, ‘Best Italian Restaurant’ and ‘Best New Restaurant Nationally’, elevating the restaurant to one of Sydney’s premier Italian Restaurants.  Lo Studio was also named in the Conde Nast Traveler “Hot Tables” list among an elite group of 82 new restaurants worldwide identified as having a unique confluence of great food, outstanding service, and sophisticated style. The magazine described Danny as “one of Sydney’s most inventive chefs” who has “developed a style best described as New Italian-Australian fusion”.

While at the highly acclaimed The Beresford Hotel in Surry Hills, Danny was featured twice in the New York Times, as well as receiving rave reviews in Vogue Entertaining and Travel, Sydney Morning Herald, Time Out, The Daily Telegraph and The (Sydney) Magazine.

Danny now consults to the restaurant trade and is focused on delivering tailored food service projects and services that make a difference in a client’s operations, branding and bottom line, while also creating satisfying and lasting value to its customers’ dining expectations. Be that delivering unique and innovative operational solutions to food service projects, or providing specialised services to re-position or improve an establishment’s entire food and service offering.

Danny’s perceptive take on dining trends and influences, combined with classical training and extensive experience in Europe, allows him to astutely craft appealing food offerings for clients’ venues that consistently capture the imagination and approval of patrons.

Danny strives to create innovative contemporary Italian food, without compromising the integrity of the classic Italian cucina. His Italian heritage sees him specialising in modern Italian cuisine, reworking classic recipes to create a combination of traditional flavours and modern style.

His consulting work at The Old Library in Sydney’s beachside suburb of Cronulla has seen his cooking and influence earn the new establishment accolades from Terry Durack in The Sydney Morning Herald, Simon Thomsen in The Daily Telegraph and Elizabeth Meryment in The Sunday Telegraph in an unprecedented week-long stream of glowing reviews. In 2013, Danny worked on award-winning establishment The Laneway Lounge, Perth.

Danny’s consultancy work with The Oaks Hotel saw the iconic Sydney institution take out the coveted Good Food Pub Guide Best Steak award for 2014. He was also behind the culinary experience at the bi-monthly Six States of Beer event, providing a curated menu reflecting local produce from across Australia.

Danny is currently consulting at The Italian Kitchen in Miranda, with Taste’s Anthony Huckstep applauding Danny’s innate understanding of Italian cooking and ability to “present a restaurant to the mid-market with a top-level touch.”