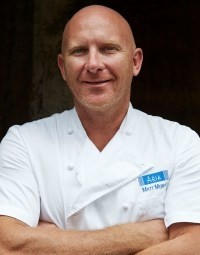 Matt Moran is a renowned, multi-award winning chef, restaurateur and an industry icon, with an ever-growing list of successful restaurants that consistently garner praise from the food industry, media and general public alike.

A highly driven and passionate individual, Matt’s accolades are strong. With 10 successful businesses and 30 years’ experience in the food industry, he has 20 years’ experience giving keynote speeches, cooking demonstrations, media interviews and panel discussions. Needless to say Matt is well versed in the art of presenting. Arguably Australia’s most recognisable chef, for the past 10 years he has been host or presenter on some of Australia’s most loved television programmes including Masterchef, Heat in the Kitchen, Masterchef Junior, The Chopping Block, My Restaurant Rules, the Bank and most recently, his own award-winning TV show, Paddock to Plate which screens internationally.

Matt began his food career early. At 15, Matt finished school to start his career as a chef. He began his apprenticeship at La Belle Helene Restaurant, Roseville, on Sydney's North Shore and it was here that Matt discovered and practiced the art of classical French cooking. Little did he know then that he would one day own some of Australia's most acclaimed restaurants.

He had a simple childhood, raised at first on a dairy farm in Tamworth before moving to Blacktown (a time in his life he describes as “rough”). But it was in those early years on the farm that Matt developed a commitment to the land and a love for food and seasonal, local produce. Today, this is reflected in his menus and in the quality and freshness of his produce. For example, his lamb comes from Greenhills, the award-winning Moran family farm in the Central Tablelands. Surrounded by pristine countryside and with a crystal clear, spring-fed water supply the farm produces premium quality, free-range lamb using sustainable and environmentally conscious methods.

Matt opened his first restaurant in 1991 at the young age of 22, The Paddington Inn Bistro. The success of it led to a second, Moran’s Restaurant and Café in 1995, which was awarded best new restaurant in the Sydney Morning Herald, Good Food Guide.

Four years later, he opened ARIA Restaurant in one of the most enviable positions in Sydney on the water’s edge, overlooking the Opera House spectacular Sydney Harbour. ARIA has been consistently awarded two coveted Chef’s Hats for almost 15 years. He has since opened several other praised, popular highly respected venues including CHISWICK, ARIA Brisbane, North Bondi Fish, Riverbar & Kitchen, Opera Bar, CHISWICK at the Gallery and also has a successful catering business as an offshoot of ARIA in both Sydney, Brisbane and exclusively, at the Sydney Opera House. His restaurant business continues to expand.

Matt Moran believes that seasonality is one of the most significant ingredients in achieving a flavoursome, balanced and premium quality menu and his contemporary menus are inspired by his passion for sourcing the finest seasonal produce available. Vogue Entertaining has described Matt Moran's food at ARIA as 'a revelation' while distinguished wine writer James Halliday has called the wine list 'the best in Australia'. The Sydney Morning Herald has said of the restaurant's unmatched location: "If you were any closer to the Opera House, you'd be in the audience."

Since 2003 Matt Moran has been a member of the International Culinary Panel for Singapore Airlines. He has also represented Australia internationally promoting food and wine throughout Asian regions. In May 2003, he was invited to New York to appear at the esteemed New York culinary institution James Beard House.

While Matt's main focus is his restaurants he also enjoys sharing his experience and knowledge to the public through the media. Matt was part of 'The Bank' on Channel 7's high-rating reality TV program, My Restaurant Rules in 2004 and 2005. The Bank comprised of a panel of four experts in the food game who give advice and input into the creation of each restaurant.

In 2005, ARIA Restaurant and Matt featured prominently in Heat in the Kitchen, an insightful documentary looking at the lives of three Sydney chefs and their restaurants. The documentary followed the restaurants for a year, coinciding with results from the Sydney Morning Herald Good Food Guide Awards. The show aired on SBS in Australia and is still broadcast internationally. In 2008 he became the resident top chef on Channel 9's reality cooking show The Chopping Block and in 2009 one of the guest judges of Channel 10's enormously successful cooking show MasterChef.

Matt Moran has been part of the judging panel for the coveted Delicious Produce Awards since its inception in 2005. He is a frequent contributor to domestic and global media publications and participates in food festivals and events. He has travelled the country visiting farmers and producers and researches food trends worldwide. GQ Magazine praises his career, food, menus and down to earth character describing him as a ‘man of substance’. They awarded him Chef of the Year in 2012 and also, Food Force of the Year in 2014.

Matt is also a published author, having written four best-selling cookbooks, Matt Moran, When I Get Home, Dinner at Matt’s and Matt’s Kitchen Garden.