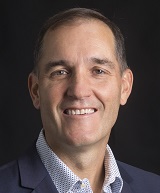 He is author of four books including the Amazon.com bestseller Developing Knowledge-Based Client Relationships, now out in its second edition, and the acclaimed book Living Networks, which The New York Times credits with predicting the social networking revolution.

Ross’s frequent media appearances include CNN, Bloomberg TV, SkyNews, European Business Network, Channel News Asia, ABC TV, Today and Sunrise shows, New York Times, The Guardian and many others. Ross has been named as one of the most influential people in the world on topics including the future of work, fintech, crowdfunding, and Enterprise 2.0.

Ross Dawson is an engaging speaker with the ability to get people thinking beyond tomorrow. He spells out what it will take for businesses to succeed in the knowledge-based economy of the future, providing a practical framework that audiences from any services industry can understand.

Ross spoke at a senior management team offsite themed about partnership models. His presentation stimulated our thinking on several levels. It challenged our preconceptions about the value of information, the adoption and adaptation of new technologies, the shifts in client relationships and the networked economy. His thoughts on leadership and communication were extremely valuable in promoting a lively discussion. Ross is an innovative thinker and has a practical and engaging approach to presenting his ideas and knowledge. His contribution to our offsite was one of the keys to making it such a success.

I would like to thank you for contributing to our Professional Services Executive Advisory Council meeting in Miami. As the keynote presentation, you got the summit off to a great start in helping SAP and global industry leaders present to develop and define a long-term vision for the industry. Many of the follow on discussions referred back to the points you raised. Your insights and professionalism were evident to all in attendance.