4 in a Groove Travels from Cairns, QLD 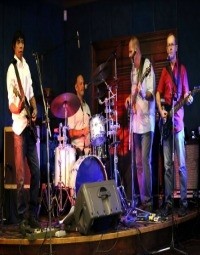 4 IN A GROOVE are a four piece Rock, Rhythm and Soul Band. They have an uncompromising attitude as well as a big punchy sound. They have been involved in the entertainment scene for over 15 years and playing at most venues in and around the Cairns area.

The band has also supported a number of large acts like Jimmy Barnes, Brian Adams, Darryl Braithwaite, Screaming Jets and Matchbox 20. The group performs a wide range of music, and their front man on lead vocals, Henry Oberleuter, has a strong, convincing style. His talents are well recognised and he also has the ability to entertain and capture audiences from young to old.

Their lead, rhythm guitarist, and back up vocals, Leon Gordon has a degree of music from the Conservatorium. He also does blistering solos that make him sound like his batteries will never run low. His talents on the old guitar make him a top class performer. Frank Whitmar, on drums, has played with a number of international entertainers. He is regarded as one of the top drummers in North Queensland and his individual talents make 4 IN A GROOVE a great band for any occasion. Mark Laurenzi plays bass guitar and is the band's back up vocalist. He has over 15 years' experience which include having played with the Eurogliders. Mark is responsible for producing the bands big punchy sounds which the local band is renowned for.

70’s STIR IT UP, BLACK MAGIC WOMAN, JET AIRLINER, ROCKIN' ME, LONG TRAIN, DRIFT AWAY, C.C.R.MEDLEY, MY BABY, AIN’T NO SUNSHINE, WAIT IN VAIN, LONG AS I CAN SEE THE LIGHT.

90’s ONLY WANNA BE WITH YOU, SELLING THE DRAMA, ALIVE, HOLD MY HAND, ALL OVER YOU, PICK YOU UP, PUSH, WALKIN' ON THE SUN, ALL FOR YOU, LIFE, I’LL BE YOUR BABY TONIGHT.

2000’s DROPS OF JUPITER, AMAZING, WHEREVER YOU WILL GO, HOW YOU REMIND ME, CREEPING UP SLOWLY, DRIVE-EASY TONIGHT, HANGING BY A MOMENT, GENERATOR.