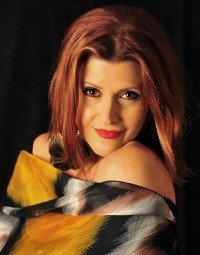 A singer with a voice that's been described as chocolate: rich, dark and smooth.

She has recorded 6 nationally released albums. Ingrid performs with her band and is available as a duo, trio, quartet, quintet, 6 piece or a full 8-piece band providing Latin, Swing and Jazz.

Ingrid's performances include ABC national television, as a soloist with the Queensland Orchestra, and appearances in European and US venues such as The Blue Note in Monte Carlo, the Jazz Bakery in Los Angeles and the Pizza Express, Soho & 606 Clubs in London.

A graduate of the Australian Film, Television and Radio School (AFTRS), Sydney and the Queensland Conservatorium of Music (Vocal Pedagogy), she now teaches privately and runs workshops around the country and internationally.

She has been mentor and coach for Queensland Education Department's Creative Generation for 3 years performing at the Q150 Celebrations at Boondall Entertainment Centre, Queensland Performing Arts Centre and Brisbane Powerhouse. To complement her passion for teaching, Ingrid has produced a Jazz Singers' Jam Night (held at The Brisbane Jazz Club) since 2002 and is the Vocal Co-ordinator for the 612 ABC/Jazz Queensland Valley Jazz Festival Vocal Competition.

A fearless and gifted jazz singer for whom the songs are there to be teased, flirted with and milked for all their improvisational potential.

You've probably heard these songs before - but never like this. Thoughtful, inventive and, above all, swinging, Ingrid squeezes every line for nuance and meaning. The impeccable phrasing and accurate intonation come almost as a bonus.

Ingrid James' passionate vocals cut like musical light-sabres with each note - yet injected warmth and depth of meaning and pathos that only deep compassion can bring.