Made in Australia Travels from Gold Coast, QLD 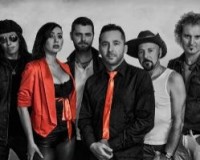 Featuring the extraordinary talents of 6 very experienced, professional musicians,  “Made In Australia” is the highest quality show of it's kind, standing alone and un-matched as the nation’s number one tribute to Classic Australian Rock.

With a wealth of experience performing in signed original recording acts, as well as top class tribute shows and popular cover bands, members of "Made In Australia" have toured and performed throughout Australia, Europe, Asia, The U.K and New Zealand.

As seasoned musicians they have shared the stage with many of this country’s most successful and biggest selling performers including Jimmy Barnes, Billy Thorpe, The Angels, Diesel, The Screaming Jets, Choirboys, Jon Stevens and many others.

"Made In Australia" delivers a powerful, high energy performance taking great pride in presenting the most authentic live versions of Australia’s most iconic classic rock songs – Undoubtedly the closest to the original artists that you will hear anywhere !!

Featuring many huge hits and re-visiting some long lost gems from Australia's rich musical past, the show contains something to please a wide range of musical tastes and audiences of all ages.

Presented with full production including concert sound and lighting, "Made In Australia" is so much more than just a covers act. It is a show. With sound effects and themed stage attire to complete a professional package, this highly impressive tribute show is suitable for clubs, pubs and corporate functions as well as major events.