The Diamonds Travels from Sydney, NSW 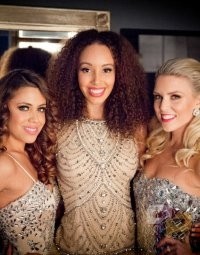 Imagine the most recognised female soul, pop and disco songs from the 20th century brought to life and you have… The Diamonds!

Featuring 3 stunning and talented young women, the show spans from the original sisters of swing and soul, to the legends of motown and divas of disco and pop – Aretha Franklin, Patty Labelle, Dusty Springfield, The Supremes, Gloria Gaynor, Madonna and Lady Gaga just to name a few.

This stylishly choreographed and dynamic show celebrates hit after hit of iconic female anthems and will have any audience enthralled. This versatile show can be tailored specifically for any event from a 35 minuted high impact corporate show to a full 90 minute concert show with either fully orchestrated backing tracks or their own band.

Think Human Nature - but with curves!