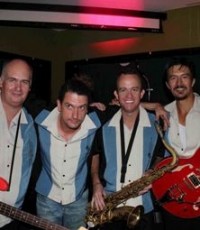 45rpm is a Townsville based band performing Rock 'n' Roll music from the 50's and 60's. The band prides itself on being the only band to deliver an authentic Rock 'n' Roll experience.

The band's repertoire consists of songs from the beginning of the Rock 'n' Roll era right through to the start of the British Invasion. They perform songs from artists such as Bill Haley, The Coasters, Eddie Cochran, Conway Twitty, Elvis Presley, Buddy Holly, Richie Valens, Roy Orbison and many more from the 50's. It is extended to 60's through music by groups such as The Beatles, The Searchers, The Beach Boys with an odd country classic thrown in for good measure.

The Band dresses in period style with matching uniforms and performs with Authentic Instrumentation from the Rock 'n' Roll era such as Archtop Guitar, Double Bass and Sax. It is a lineup that was the most popular of the 50's in which the band recreates to the most authentic sound around. Their 5 piece band provides the addition of a talented female vocalist.

Members of 45rpm are North Queensland born and bred and have enjoyed a wealth of opportunities in music over a period in excess of 20 years each. This experience is across multiple musical genres with many premier groups that have catered for some of the region's most prestigious events.

Whether the need is a large scale stage production in front of thousands to a small corporate affair, 45rpm will provide a night to remember for all guests.

A note to let you know how much we enjoyed the music of 45RPM at the Chamber’s annual gala event last week. We received a lot of positive feedback about the event, and the band was mentioned to us on several occasion. The choice of music suited our guests, the performance was spot on and you all looked great on stage. Well done and thanks again.

i just wanted to send you a quick email to say thank you for your recent performance at Jupiters. The VIP customers had an absolute blast and we received lots of fantastic feedback that they enjoyed the music selection and the chance to get up and have a dance! Everyone in the team agreed that your music was a contributing factor to the success of the evening, and I would not hesitate to book you again. All of the band are very professional and easy to get along with - you’re welcome back any time!