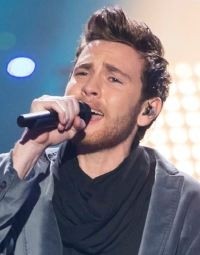 Robbie began performing professionally in 2011. He is an accomplished acoustic guitar player and singer.

His “easy listening” style is mesmerising, as is his ability to switch genres and keep the element of surprise alive during his performances.
Robbie is as influenced by current performers Coldplay, Matt Corby, Damien Rice, Jack Johnson, Angus Stone, and John Meyer as he is by “timeless” performers such as the Red Hot Chilli Peppers, INXS, The Beatles, Radiohead, Tracey Chapman, and even the legendary Sixto Rodriguez.

Robbie has come to the notice of several music producers and with their mentoring now also has quite a repertoire of originals. Their interest further confirms his quality and that he has something very unique when performing.

Robbie competed in Season 3 (2014) of The Voice Australia and from thousands of applicants made it to the top three of Team Kylie Minogue and to the top 12 artists of Season 3 – a huge accomplishment. His three live final performances – By My Side (INXS), The Scientist (Coldplay), and Love Lost (Temper Trap), all made it on to the Aria Top 100 singles chart.