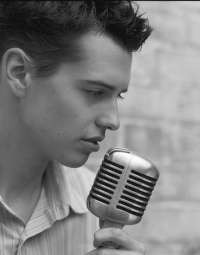 Scott Martin is one of the youngest and finest performers in the local music scene today. From the age of 22 he has been known locally as 'the young crooner'. Scott brings his unique style and sophistication to those familiar cabaret songs from stage and screen.

At the young age of twelve, he was performing professionally as a classically-trained boy soprano with Opera Queensland. He was awarded chorus roles in Tosca (in Italian), Carmen (in French), Turandot (in Italian), Hansel and Gretel (in English) and a principal role in The Magic Flute (in English).

Scott began his jazz performance career in 1998 at the tender age of sixteen, where he was invited to join a local Brisbane Big Band. Soon after much success and rave reviews from local press, he was invited to become the lead vocalist for the popular Australian 'Glenn Miller Tribute Band' in 1999. This began Scott's association with the band and the Brisbane Jazz Club.

Scott's warm, clear baritone voice is extremely versatile and can lend itself towards Jazz, Pop, Classical or Contemporary. He currently performs in Brisbane with everything from a trio, to a 18 piece big band, to working with an Andrew Sisters Tribute Band or in Sydney Scott regularly performs with a local swing trio.

They were fantastic! Very professional and talented.