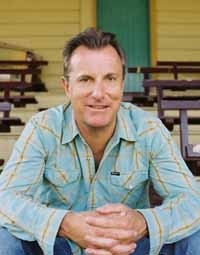 James Reyne is one of Australia's most loved singer songwriters.  His songs have provided the soundtrack to endless Australian summers, including “The Boys Light Up”, “Reckless”, “Beautiful People”, “Lakeside”, “Daughters Of The Northern Coast”, “Fall Of Rome”, “Hammerhead”, “Motor’s Too Fast” and “Slave”.

James has been a part of our lives since making an unforgettable debut on Countdown in 1979. He was a member of Australian Crawl for seven years, releasing four studio albums in five frenetic years in the ’80s. He’s been a solo artist for the past 28 years, releasing eight studio albums, plus two acoustic collections, a covers album and two live albums.

Thirty years after it was released, Australian Crawl’s debut album, The Boys Light Up, was featured in The 100 Best Australian Albums. “Australian Crawl would never have gone much beyond their living rooms on Victoria’s Mornington Peninsula,” the authors noted, “had it not been for singer/songwriter James Reyne … a keen observer of human nature and a man with a vitriolic wit.”

James has worked a diverse range of projects, hosting the first series of Dig TV on ABC 2, recorded material for Children's books, while still finding time to perform live around the country.

His song-writing coupled with his idiosyncratic vocal style, enabled James to transcend the disposability of music industry fashion and carve his place in the musical landscape of Australia.

As for those old Oz Crawl crowd-pleasers, well, it’s amazing how a man can make peace with his past with nothing but an acoustic guitar, a microphone, a simpatico collaborator in co-producer Scott Kingman, and a little invention.