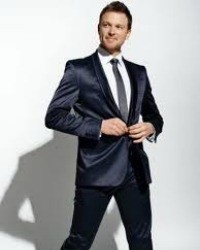 The Tim Campbell Band is your premium cover band in the corporate and live event industry. Supported by some of the best musicians in the business, Tim launched this band off the back of his Channel 9 TV show The Singing Bee and has already become one of the most sought after premiere cover bands on the events scene.

Step back in time, and boogie on down to the most loved songs of the 70s, 80s and 90s with The Tim Campbell Band. Tim is known for taking his audience on to the dance floor and keeping the event energised and alive all night long. Tim is in his element with retro music, and the audience always loves reliving classic hits.

2014 was an incredibly successful year for Tim Campbell and his band. Not only releasing his studio album “High School Disco” which debuted at 25 on the ARIA album charts, but also a national concert tour, opening with 2 sell out shows in Adelaide, right through to a sell out at The Palms at Crown in Melbourne.

Tim also had his biggest year in the corporate market both as emcee and with the band, including a record number of re-bookings across the country and international performances with the band, leaving delegates wanting more in Ho Chi Minh City, Vietnam. 2015 is already looking promising with events again across the country, in Kuala Lumpur and Los Angeles.

With an extensive list of TV and musical theatre credits including Carols By Candlelight, The Good Friday Appeal, Carols in the Domain, Shout!, Rent and Wicked, Tim has been invited to entertain thousands at corporate events as a feature vocalist.

Be it with his own band, the house band, featured orchestra or even to recorded track with a theatrical dance production, Tim is one of those talented and versatile singers who can deliver on any brief to help make the event a success. This mixed with his Emcee skills will allow the perfect connect with an audience and will round out a complete night of entertainment for any small or large scale event.

The guests loved his performance and the addition of the dancers definitely helped encourage the dance floor fill in no time. However I am sure it would have been full with the upbeat interactive performance. Tim and his band played to the brief, with a request of including Christmas songs that easily worked into his sets.

There is truly no end to the talent of TIM CAMPBELL. My events have required him to dance with a chorus line, sing with a choir and belt it out in front of a big band and he continues to shine every step of the way. This testimonial does not scratch the surface.

Tim Campbell was a dream to work with, and brought energy, charm, talent and sparkle to the concert. He had the audience jumping in the aisles. A great entertainer!