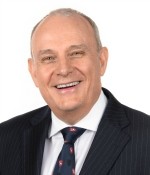 Paul Brennan joined London’s Metropolitan Police Cadets when he was just 16 and and the age of 18, he saw an advertisement for a US Summer Camp Counsellor and left the Police. The US experience changed his life and within four years Paul achieved a LL.B (Hons). Paul's first started working as a law clerk at a large Toronto firm, and in 1982, he qualified as a lawyer.

Paul then became a solicitor at New Scotland Yard and then at the criminal firm, which once represented Christine Keeler. In 1985, Paul opened his first legal business in Lewisham, South London.

After two years, he emigrated to Sydney and set up his second legal business. He moved to Asia for ten years, and was a consultant to a Hong Kong law firm, and Counsel and investigative manager with Intel Corporation.

Paul then became a tenant barrister in the Middle Temple, London. He was head hunted to be the General Counsel of the Federation Against Software Theft to conduct enforcement and lobbying in the UK and Europe. He became a post graduate in IP law and wrote his first book.

His books, CDs and ebooks have titles like “The Law is an Ass…Make sure it doesn’t bite yours!”, “The 10 Greatest Legal Mistakes in Business …and how to avoid them”, “A Legal Guide to Dying….Baby Boomers Edition”. Paul says it is the sort of daily advice that small firm lawyers give to their clients.

He has drawn legal cartoons for the Australian Financial Review and the Hong Kong Tatler.

“For a profession known for taking itself rather seriously, lawyers are also exceptionally good at seeing the funny side of the practice of law. There are few better at the art of skewering the pretensions and idiosyncrasies of legal practice than Queensland lawyer Paul Brennan”.n