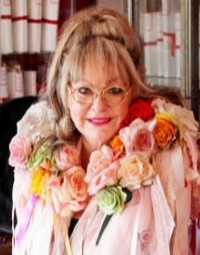 Sally Browne has lived life to the full… Hers is a fascinating story:

From humble beginnings, to designing high fashion, and on to high altitude adventures, from taking to the stage as a washboard player with a jazz band to strutting the stage as a Key-note Speaker, from being a stressed out working mum of four to developing the first heart rate monitor to measure stress, and from community worker and philanthropist to mentor and nurturer for young business people. Sally is a walking example of ‘don’t just dream it, do it (and go for it!!!)’

Sally has received a myriad of awards for excellence in fashion design and for outstanding business leadership. Her philosophy is to live life to its full potential, and her tag is ‘take risks, take care, have fun.'

Perhaps Sally’s fashion career started at 13 when she began playing the washboard with the Red Onion Jazz Band and made a new ‘frock’ each Saturday to wear on stage later that night. She was proud to be beatnik and a jazzer in this era. Sally completed her schooling and went to work at the Lucas Factory on Flinders Lane sewing French designer labels under license for elite and elegant boutiques in Melbourne. She was taught her skills by the wonderful Kitty La Haive.

She then went to learn about ‘Red Hot Retailing’ at Sportsgirl under David Bardas (CEO). At this point she was also trained in merchandising, styling and buying, under the talented guidance of Anne Souter, and together they started the Just For Sportgirl Label. Armed with manufacturing and retail experience Sally decided to start her own business with her husband at the time (Jazz Drummer Allan Browne). Together they had three sons and built a fashion brand, designed exclusively by Sally, which filled a niche for intricate, unique and edgy clothing. These whimsical designs were sold through over 400 boutiques throughout Australia.

During this time the marriage ended, but the business expanded and grew, driven by Sally’s insatiable curiosity and energy. Sally thrust herself into many business and property ventures (and a brief marriage and a baby girl) while continuing to design the Sally Browne Label with the support of her wonderful staff. She also started Designer Trim (with Ken and Sue Lord), importing beautiful trims and buttons from all over the world for retailers and designers.

Later on, along with some of her friends, Sally developed the 'Giggle Goggles' (A fairly insane pair of goggles that created inversion and spatial drift - an effect invented by opticians - to render adults and children hilariously incapable of operating normally). She also conceptualised Pack Your Hat (a foldable fashionable sun hat), and opened The Life Shop (the first, and last, retail shop that focused on de-stressing, and calming products). Alongside The Life Shop, she developed (with Polar in Finland) the Polar Mentor Stress Monitor, a heart rate monitor that can identify and measure stress. With the aid of a few geeks, Sally also put online a website in the very early '90s known as WWW (While We Wait) - it was such a slow load back then!

Some of these business and property ventures worked, some of them just seemed a good idea at the time (and were sources of great laughter and some financial loss!). That said, all of them were great learning experiences!

Excellent. Sally was a very entertaining, enthusiastic, and informative speaker. Her capacity to hold a captive audience was excellent.

Sally's presentation was very warm, funny and inspiring. It was wonderful listening to her message about embracing change, enjoying challenges and reminding us that we can achieve just about anything with the right attitude! We all came away bubbling with enthusiasm.

Sally took time to really get to know our business and that was presented within her brilliant, inspirational address.