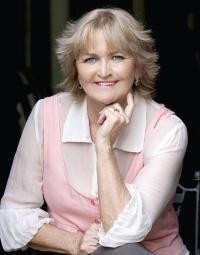 Ros Worthington's drive and determination to champion causes and be a voice for the voiceless knows no bounds. Ros has clawed her way back from the brink of many adversities and she stands where she is today - as a charity powerhouse, unique social philanthropist and respected female role model - because of her inspiring ability to turn pain into power.

From enduring abuse as a child in foster care and being labelled a high-school dropout, Ros is proof that where you start in life does not dictate where you end up.

Ros has been the driving force behind many well-known charities in WA. Her foray into the charity world began 25 years ago when she established the Make-A-Wish Foundation in WA, granting hundreds of wishes to terminally-ill children.  As a keynote speaker Ros focuses on charities she is involved with and her philanthropy work.

Ros’ own health battles with chronic breast disease from the age of 16, which saw her undergo a mastectomy at 34, was the spark that eventually saw her start Breast Care WA, formerly the Breast Cancer Foundation of WA. In its first decade, the foundation, which provides grass roots support to breast cancer sufferers and their families, has become one of the State’s most successful charities.

Ros’ affinity with children led her to start the Love Angel Foundation, which teaches children the lifelong values of love, compassion and philanthropy and raises funds to feed and educate orphans and widows in third world countries around the world.

Ros’ darkest moment came when she lost her beloved husband to suicide. But through her own unspeakable grief, Ros saw the need to shine a light on the hidden and stigmatised issue of mental health. She has most recently spearheaded the successful HelpME campaign, with Lifeline WA, to help lift the veil on depression and suicide and let those suffering know there is no shame in asking for help.

Throughout her life’s work, Ros has been awarded an Order of Australia Medal, been named Ernst & Young Social Entrepreneur of the Year for the western region in 2006 and United Way’s Philanthropist of the Year in 2010. She has also been singled out as one of several Courageous Australians to grace the covers of this year’s White Pages and was last month featured in The West Australian newspaper as one of WA’s 100 Most Influential People.

While her remarkable journey is still a work in progress, what Ros teaches us all is that one person, no matter what life throws at them, has the power to make a difference in the community. Ros' dedication to others, especially children, has earned her the reputation of one of Western Australia's highest-profile philanthropists. She is a passionate, visionary and motivational presenter and her personal and professional achievements are inspirational.