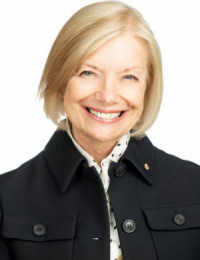 Heather Ridout is a company director and Reserve Bank Board member with a long history as a leading figure in the public policy debate in Australia.

Heather is an Employer Director of AustralianSuper and a Director of Sims Metal Management - the world’s largest publicly listed recycling company.

Her other appointments include membership of the Boards of Skills Australia; the Climate Change Authority; the Australian Chamber Orchestra; Asialink; and the Advance Australia Advisory Board. She is also a member of the Australian Press Council National Advisory Panel.

Up until 2012, Heather was Chief Executive of the Australian Industry Group - a major, national employer organisation representing a cross-section of industry including manufacturing, construction, defence, information and communications technology and labour hire.

Heather was appointed an Officer of the Order of Australia (AO) in June 2013 for her services to Australian industry.

A mother of three, Heather is also an ambassador of the Australian Indigenous Education Foundation. She was awarded the Centenary Medal in 2001, a Vocational Excellence Award from Rotary International in 2010 and an Honorary Doctorate of Business from University of Ballarat in May 2011.

Heather also made the shortlist for the title National Living Treasure, this title is conferred when someone accomplishes an outstanding achievement, swelling the country’s consciousness with admiration, pride and acknowledgement... be they scientists or sports stars; actors, artists or Indigenous activists; politicians, philanthropists or explorers.

In 2019 Heather announced her departure from AustralianSuper after 12 years' service on the fund's board, with the last six as chair.