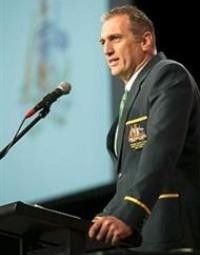 Mick Colliss’s tale of mateship, creative thinking and sudoku will leave you breathless with laughter. Mick and his best mates travelled to India to take part in the International Sudoku Championships – even though they didn’t know how to play the game.

Mick is an author, writer, rugby commentator, emcee, guest speaker and modern-day poet. He is a gifted story teller with a very funny story to tell.

As a young kid growing up, his dream was to play for Australia. But he quickly discovered desire is no substitute for ability. Then finally, at the age of 42, after successive failures at cricket, rugby league, rugby union, surf lifesaving and lawn bowls, he discovers the game of sudoku.

He can’t play that either.

But it doesn’t stop him picking himself and three mates from rugby in the first ever Australian Sudoku team and traveling to India to compete for his country at the World Sudoku Championships.

Mick’s is a laugh out loud true story about mateship, having a go and never giving up, no matter what the odds. It's ideal for corporate, sports and school functions.

Mick certainly met our expectations. He was very well received by our audience, I don’t think there was a single person in the room that didn’t have a smile from ear to ear and sore cheeks from the continuous laughter that he provided on the night! A fantastic laugh out loud story, and an all round brilliant entertainer!