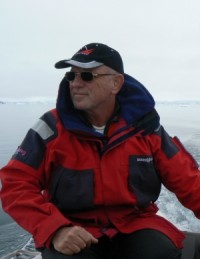 In December 1998 Tony Mowbray and his crew aboard his yacht, “Solo Globe Challenger” participated in the ultimate team building challenge when they competed in the Sydney to Hobart yacht race, encountering the worst race conditions in its then, 64 year history. Tony and his crew would fight a 15 hour epic battle of life and death in 160 km/hr cyclonic winds and killer waves tall enough to engulf a 10 storey building. Tragically six men died.  Against the odds, Tony survived, however his dream of sailing around the world was in tatters. His boat all but destroyed, he was physically spent, mentally near broken and severely traumatised.

Now you have to ask yourself… “What makes a man want to sail around the world after coming so close to losing it all? His boat…his mates….his life!? The answer… “The Power of Commitment”

20 months later Tony had rebuilt his boat and set off on an epic non-stop journey around the world.  He successfully completed the trip, and his home coming was to a crowd of 30,000 people.  The "Power of Commitment" enabled Tony Mowbray to sail solo, non-stop and unassisted around the world, spending 181 days alone at sea. His record-breaking adventure required 100% commitment, teamwork, total focus and unswerving self-belief.

In December 2001, just eight months after finishing the solo world trip, Tony and the same team from the ‘98 race quietly crossed the finish line of the 2001 Sydney to Hobart.

In 2003 Tony mounted his first Antarctic expedition, taking four non-sailors to the windiest place on earth at sea level. He took them to “The Home of the Blizzard!” and they learnt the importance of responsibility within a team, to be prepared for anything, to manage the small challenges within the big challenge, and that with 100% commitment, ordinary people can achieve extraordinary things! They returned with their lives changed forever.

Tony Mowbray speaks with absolute authority about the “Power of Commitment”. His inspiring story offers all who hear it, a recipe for success in today’s tough business climate. Tony’s honest and fresh style of presentation exudes passion. He constantly draws upon his experiences sharing the lessons learnt with each audience, in a highly customised fashion. He is focused on giving the audience genuine “take home value”.