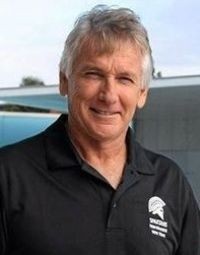 Professor Brendan Burkett OAM (Medal of the Order of Australia), has achieved a lot in life despite losing his leg in a hit and run accident in 1985. Brendan's strength of character has turned tragedy into triumph and as a conference speaker he delivers a keynote that will inspire any audience.

Professor Brendan Burkett OAM interests focus on understanding human health and performance. Brendan’s qualifications include a bachelor and masters in engineering, a PhD in sport science, level 2 coach certification and accreditation as a level 2 sports scientist and high performance manager. These qualifications, in combination with Brendan’s experience as an athlete, create a practical and applied approach to solving human performance questions.

As a past international sports person Brendan was fortunate enough to represent Australia for 13 years as a swimmer and was the Paralympic Champion, World Champion, World Record holder, Commonwealth Games and Australian multiple medallist. Brendan has been privileged to lead the Australian team on several occasions, such as the Australian Team Captain for the 1996 Atlanta Paralympic Games, and as the Opening Ceremony flag bearer in Sydney 2000 – Australia’s most successful sporting team. Brendan is an inductee in the Sunshine Coast Sports Hall of Fame, Swimming Queensland Hall of Fame, and a ‘Sporting Legend’ in Queensland’s Sports Hall of Fame.

As a professional engineer Brendan worked on projects in Australia and overseas on the Oil Rigs in the North Sea. Brendan was the Institution of Engineers, Australia, Professional Engineer of the Year in 2000. Brendan is also a professional sport scientist (Level 2) and high-performance manager.

Real-world experience has been attained as an Australian team member for the past 8 Paralympic Games and numerous world championships. This includes being an athlete at the 1988 Seoul, 1992 Barcelona, 1996 Atlanta and 2000 Sydney games; and as a sport scientist at the 2004 Athens, 2008 Beijing, 2012 London and 2016 Rio games.  Brendon went to Tokyo in 2021 in the role of the Australian Paralympic swim coach leading a team of  34 swimmers.

The combination of sporting and professional achievements have been recognised as Brendan is the recipient of several awards such as Australia Day Sporting Awards, the Order of Australia Medal (OAM), and an Australian Sports Medal recipient. The impact of Brendan's research in human health and performance are demonstrated with research grants and publications in this discipline.

Brendan Burkett is an inspiring and humorous keynote speaker and will equip you with the skills to lead and motivate your team.