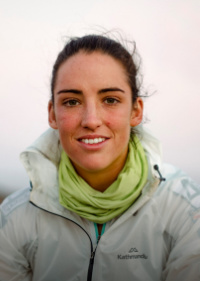 Jacqui is an ultra-runner from Brisbane, Australia.

Coming from a tennis background and working as a personal trainer since the age of 16 Jacqui always kept fairly fit. At 19 Jacqui signed up to her first 50km Race, not even knowing this counted as an Ultra Marathon at the time, she placed 3rd and was on a high for a week. From here Jacqui entered a number of other events sporadically over the years for fun and to give herself some goals.

Then in 2017 when Jacqui was at rock bottom after battling with a number of health issues that were affecting her physically and mentally. This is when she set herself the goal of running 250km’s across The Simpson Desert in Australia – The Big Red Run. Jacqui had 8 months to build up her fitness… the starting point being about 30km’s a week. Jacqui got researching on all things Ultra Marathons and that is when she discovered Racing the Planet’s 4 Deserts… next thing she knew she decided to go not just one bigger but 4 times bigger… forget the Simpson Desert, hello to one of the toughest enAn Ultra-marathon runner.

In 2018 Jacqui went on to become the Youngest Female in The World to conquer Racing the Planets x4 Desert Grand Slam running 250km’s self supported across the scorching Namibian Desert, Gobi Desert, Atacama Desert and the blizzards of Antarctica. This was just the start for the young gun as Jacqui has now become the Youngest Person in the world to run an ultra marathon on all 7 continents.

Today you will find Jacqui competing globally in Ultra marathons and striving to see what she is really capable of in this sport. Outside of running she is also a professional speaker on a mission to inspire, educate and activate a deeper sense of purpose in tomorrow’s leaders enabling a deeper awareness around the power of choice, what it really means to show up and commit, and what it takes to strive for a higher potential regardless of the opportunities. After all we can choose to rebel, but use that rebellion to propel you into a better future.