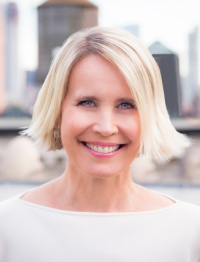 International Speaker, Concert Artist and Songwriter Karen Jacobsen’s speaking voice unexpectedly led to a unique pop culture status. In over a billion GPS and smartphone devices worldwide, including the original Aussie voice of ’Siri’, hers is the voice of reason, telling us where to go and what to do on a daily basis. In real life, through her songs, concert performances and speaking presentations, she entertains and inspires people to recalculate their way to their dream destination in life.

In a late 1970’s living room in Mackay, Australia, seven year old Karen Jacobsen saw Olivia Newton-John on television and knew what she was meant to do with her life; to become a professional singer and move to America.

Driven to follow her dream and born to light up the stage, Karen moved to New York City with one suitcase becoming an award-winning Singer and Songwriter. Musical career highlights include: sharing the stage with Norah Jones, Neil Sedaka, Jon English and Christopher Cross, national anthem performances at major sporting events - Madison Square Garden, Fenway Park, Dodger Stadium, for 80 000 at Giants Stadium for a New York Jets game, Queensland's Suncorp Stadium for an Australia vs South Africa TriNations International Rugby Game for 52 000 - and licensing her songs to US network television.

In her first years in New York City, Karen auditioned to record a text to speech voice system, having no idea it would take her voice to every corner of the globe. From that one voice-over booking she created her empowerment brand The GPS Girl®, giving directions for life and business and showing how to navigate change powerfully with the 5 Directions for Recalculating process.

An International Speaker and Concert Performer, both live and virtually, she has taken her universal message to national and international events across multiple industries including finance, health, education, travel, real estate, as a TEDx Speaker and Global Artist in Residence at High Point University. Karen has also enjoyed wide international media coverage, and was told she had made it when named as a clue in The New York Times crossword puzzle. She particularly enjoyed Harry Connick Jr calling her “hypnotic” on his national US talk show and media highlights include: NBC Today Show, ABC World News Tonight, CBS Early Show, Sunrise, NY Daily News, The Guardian, Glamour magazine and being named one of People Magazine's Most Intriguing People.

“Recalculate Your Life” events and retreats are powerful transformational experiences Karen delivers in person and virtually. She is an in demand Voice-Over artist recording customized voice systems and advertising campaigns, and a prolific songwriter and Recording Artist, currently working on her 10th studio album. She is the Composer for musical theatre productions “Perfectly Imperfect”, “Before Time”, and her one woman musical memoir “Mackay to Manhattan,” which premiered at the Mackay Entertainment and Convention Centre in Australia in September, 2020.

“Mackay to Manhattan” - A Musical Memoir is a part concert, part motivational journey that leaves Karen’s audiences elevated with powerful insights about their own lives. Her timeless melodic songs, powerful vocals and message “It Is Never Too Late To Recalculate” leave everyone energized and engaged with their potential.

Karen, her husband and young son thought they were coming to Australia from their New York City home of 20 years for a few weeks to visit family at the beginning of the pandemic. Recalculating everything and coming full circle, they find themselves living near the Great Barrier Reef during this unpredictable time.