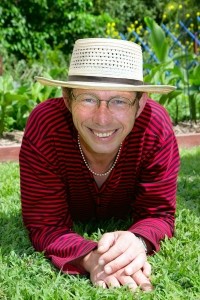 Jerry Coleby-Williams is an internationally experienced horticultural botanist, a conservationist, a writer and Director of the Seed Savers’ Network Inc. He is the Patron of the National Toxics Network Inc.

Growing 500 kinds of plant, the food garden feeds the household while the ornamental front garden is designed to deal with predicted climate change.

Over 520 species of animal, including twenty four species of bee, and about six new insect species, as yet undescribed by science, live at or visit Bellis.